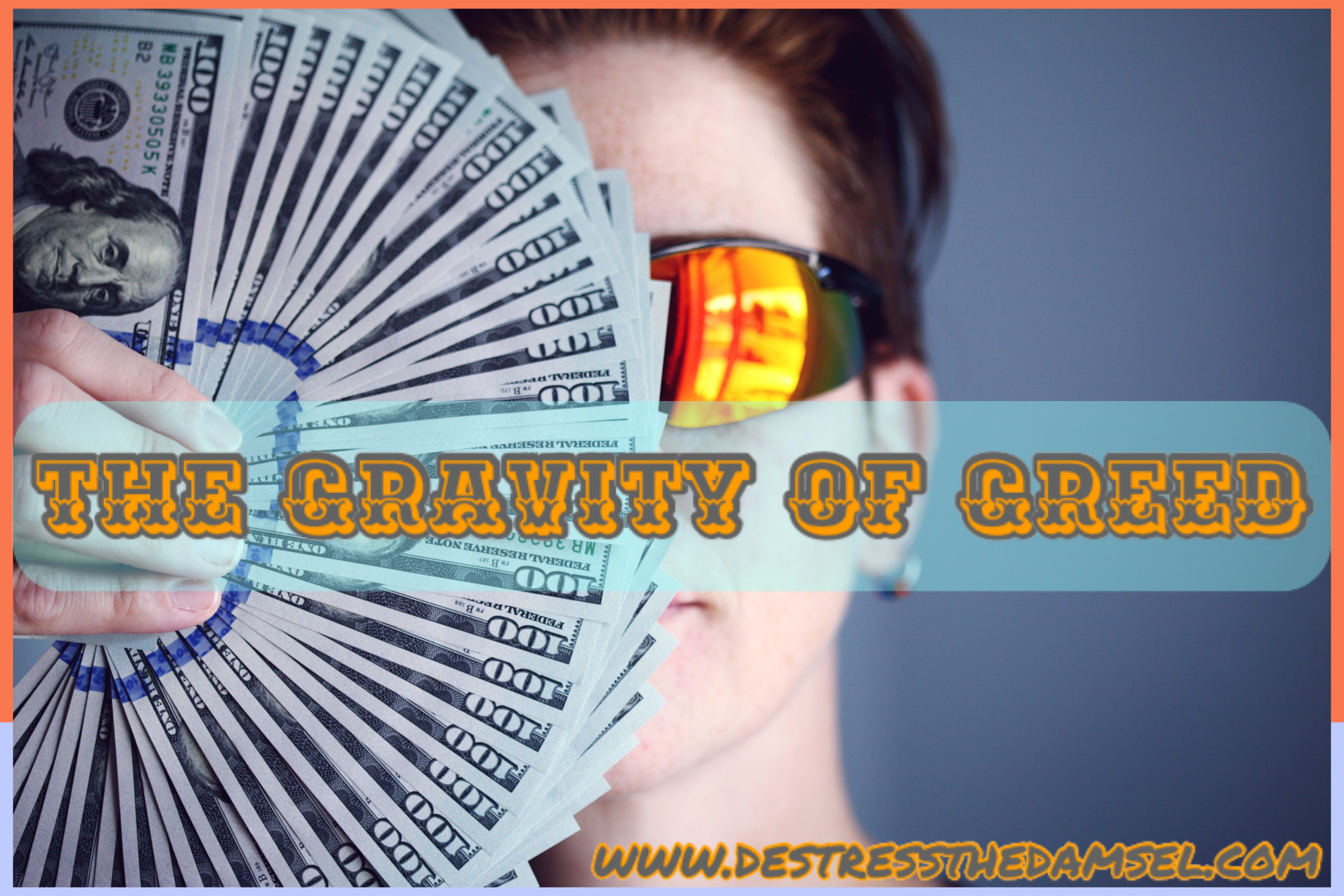 “There was once a Countryman who possessed the most wonderful Goose you can imagine, for every day when he visited the nest, the Goose had laid a beautiful, glittering, golden egg.

The Countryman took the eggs to market and soon began to get rich. But it was not long before he grew impatient with the Goose because she gave him only a single golden egg a day. He was not getting rich fast enough.

Then one day, after he had finished counting his money, the idea came to him that he could get all the golden eggs at once by killing the Goose and cutting it open. But when the deed was done, not a single golden egg did he find, and his precious Goose was dead.”

Moral: Those who have plenty want more and so lose all they have.

– “The Goose and the Golden Egg”,  a fable of Aesop

I am doubtful if this is the first time you have heard this fable, but its message is so significant and timeless that it bears repeating. Greed is a thief that preys primarily on its very host. Greed promises to give, but only takes in the end. Greed is an ancient deceiver.

1 Timothy 6:10 is often misquoted to say that “money is the root of all evil”. Here is the actual passage, in full:

For the love of money is the root of all evil: which while some coveted after, they have erred from the faith, and pierced themselves through with many sorrows.

Note that it is not money itself that is the root of all evil, but rather the love of money…A.K.A. greed. Now, what does it mean that the love of money is “the root of all evil”, anyway? Does it mean that if a man lusts after a woman, it stems from his love of racking up credit cards? Or that if a woman displays catty behavior towards someone, that it all goes back to her admiration for wads of cash? Of course the answer to both of these questions is no. The point the passage is conveying is not that “every kind of sin grows from greed”, but rather that “greed grows into every kind of sin”. The love of money has sent many a man to kill his companion, and sent many a woman into the arms of strange men. Money gained is often innocence lost, for greed always takes more than it gives.

As the scripture cited above warns, greed “pierces through with many sorrows”. Today we will discover just exactly what those sorrows are, and decide for ourselves whether or not they will be given any place in our lives. Sorrow #1 is that…

…Thou hast greedily gained of your neighbors by extortion, and hast forgotten me, saith the Lord God.
– Ezekiel 22:12

This truth is proved again and again in scripture: an over-attention toward wealth leads to an under-attention toward the Lord. As Jesus boldly stated in Luke 16:13, one can not be a servant of both God and money. We have to choose which we will be allegiant to.

Before we go any further, I want it to be clear that wealth is not a bad thing in and of itself. As was previously mentioned, it is not money (but rather the love thereof) that motivates one to sin. The Bible urges us to take heed that we do not trust in riches (Mark 10:23-25). Why? Riches come and go, but God remains. Our trust is safe and solid in the Lord, but unsure and temporal with money.

Now, in this world, it is nigh to impossible to function without currency. We need it for our basic needs such as food, water, and shelter; as well as for many wants and luxuries. In short, we all need money to get by. It is allowed and even expected by God that we will put our hand to the plow and make a living for ourselves in some way. But making a living and delving into greed are two very different things. Making a living is defined as “earning enough income to support oneself and, if applicable, one’s family.” Greed on the other hand, is defined as “an intense and selfish desire for something, especially wealth, power, or food.”. The difference lies in the attitude and focus of the heart.

When one is filled with intense and selfish desire, it is impossible to be filled with God at the same time. God is love, and love “seeketh not her own” (see 1 Corinthians 13:5). God can not abide in a heart of greed and selfishness. When we are greedy, money (or other material items) become our obsession and focus. We no longer seek after God, because our desire is in another direction.

Practically speaking, how can I keep greed out of my faith? By constantly and honestly checking my focus. Is my focus on God, or greed? The Master, or the money? Am I more interested in my eBay or my eBible? Making a buck, or making a breakthrough? Cash or Christ? This is what it boils down to: who do I love and serve? If I’m more concerned about my pocketbook than my piety, I’ve got one pricey problem.

Greed denies your Father. This is the gravity of greed. Sorrow #2 is that… 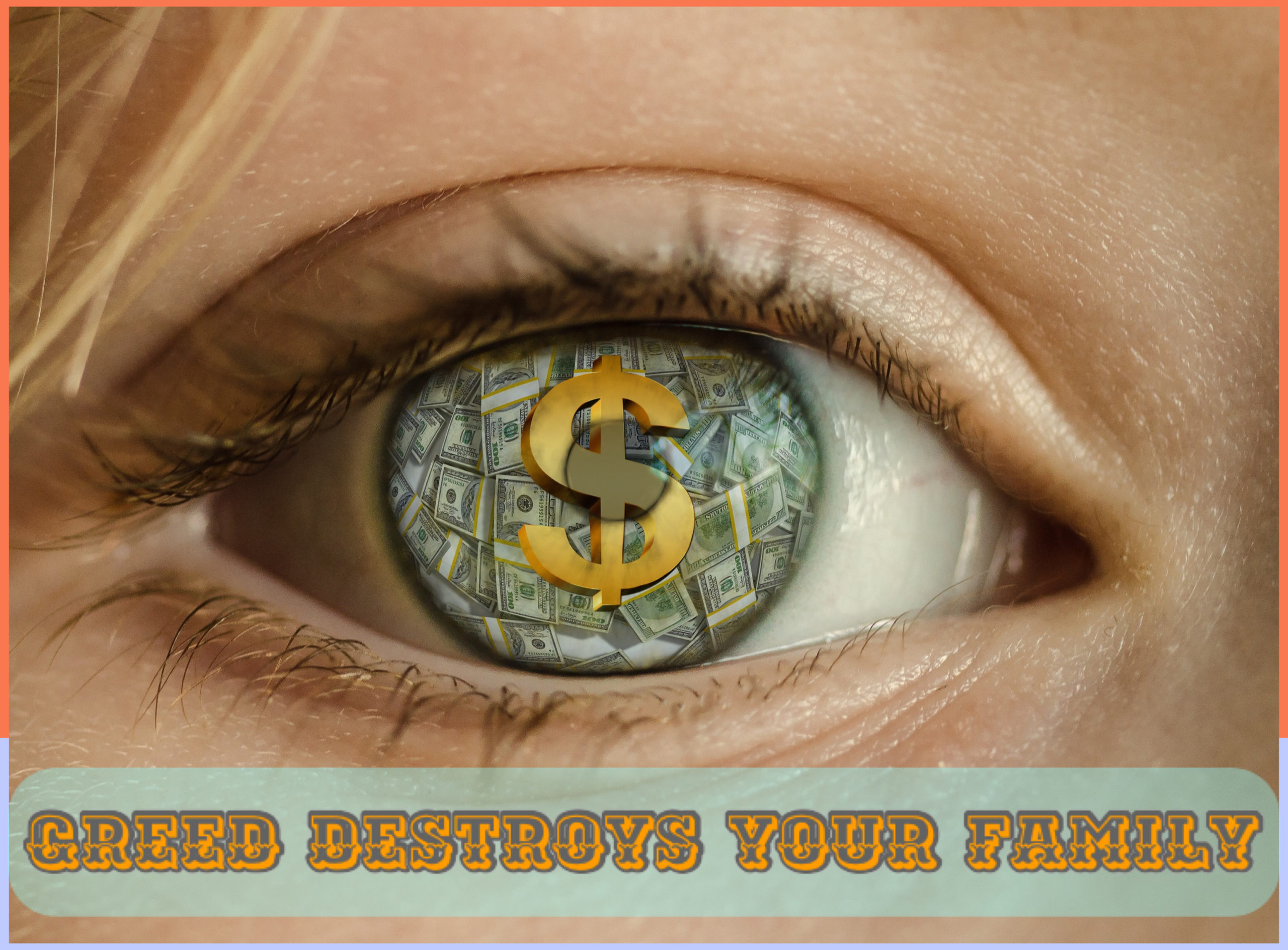 He that is greedy of gain troubleth his own house; but he that hateth gifts shall live. – Proverbs 15:27

I am reminded of a short story I have read about a father and his son. One day, a son asked his father how much money was paid hourly at the father’s job. At first the father told the son it was none of his business, but after a bit of persuasion he relented. “$100”, came the reply. Immediately upon hearing this, the son asked his father if he might borrow $50. The father became furious…after all, the son had only been asking about the wages out of selfish motives! The father ordered the little boy to go to his room and think about his rude behavior. After a while, the man calmed down. He realized that his boy had never really asked for money before, so perhaps there was something very important he wanted to purchase. He knocked on his son’s door and apologized for being so harsh previously. He explained that he had a change of mind and decided that he would in fact lend the $50 that was requested. The boy was elated…he immediately reached under his pillow, pulled out some crumpled up bills, and began counting his stash. Upon seeing this, the father began to get angry again: “Why do you want more money if you already have some?!”. The son replied, “because I didn’t have enough, but now I do. Daddy, I have $100 now…can I buy an hour of your time?”

This touching story ought to hit close to home for those who have a hard time balancing family and money. It should be a blessing to provide financially for one’s own. 1 Timothy 5:8 says that “if any provide not for his own, and specially for those of his own house, he hath denied the faith, and is worse than an infidel“! Money can in many ways build up a family, but it can also tear one apart at the seams. Provision is one thing…neglect is another; we must (again) be careful to check our focus and motives.

Being “greedy of gain“, as Proverbs 15:27 puts it, is what will ultimately “trouble our house“. It’s not the making of money that wounds the family unit, but the “more, more, more” mentality. While we may gain monetarily, we end up losing what’s really important. Just as we formerly discussed how one can not serve both God and money, one also can not be devoted to both their family and the “almighty dollar”. One will always take precedence, while the other takes a backseat. Who will win out in your life…the spouse and kids, or a stack of “Benjamins”? Heed the wisdom of Proverbs 23:4a: “labour not to be rich.”

Practically speaking, how can I keep greed out of my family? Time to check that focus again! Am I happier to be clocking out, or clocking in? Do I prefer family time, or overtime? Date night, or casual Friday? My marriage, or my moolah? My children or my chump change? If I’m more concerned about my pocketbook than my people, I’ve got one pricey problem.

Greed destroys your family. This is the gravity of greed. Sorrow #3 is that… 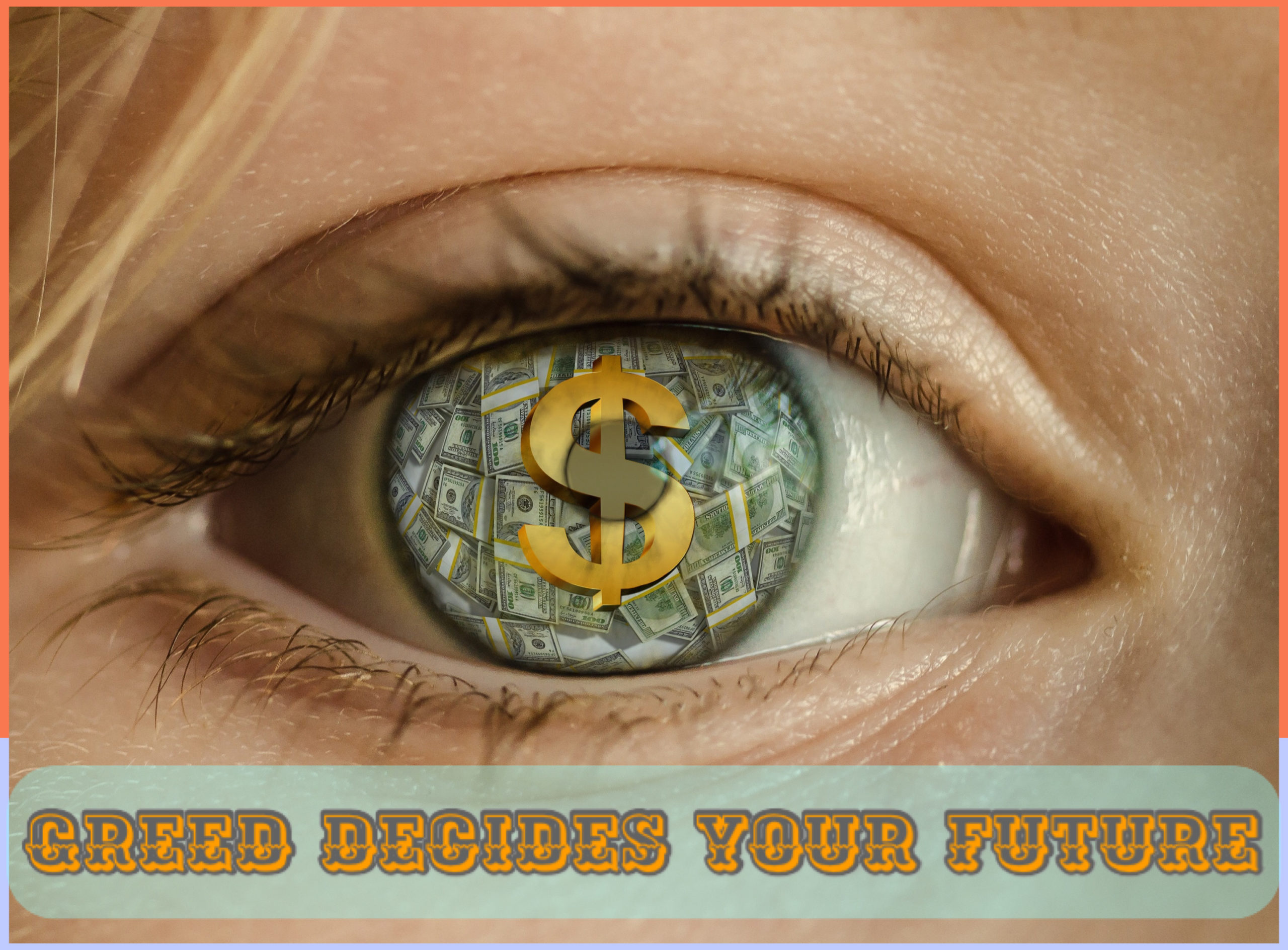 And they lay wait for their own blood; they lurk privily for their own lives. So are the ways of every one that is greedy of gain; which taketh away the life of the owners thereof. – Proverbs 1:18-19

This verse is certainly haunting. When one is greedy to another man’s hurt, they only end up bringing destruction upon their own head. I could reiterate this point a thousand times: greed promises to be a giver, but greed is a taker. For every ounce we gain through greed, we lose a ton elsewhere. We have seen that we can throw away our relationship with our Father and with our family through an unhealthy love of money…and finally, we can throw away our future as well.

Proverbs 13:7 warns that “there is that maketh himself rich, yet hath nothing“, while on the flip side, “there is that maketh himself poor, yet hath great riches.” Which team do you want to be a part of in the end – team nothing, or team riches? Most would cry, “team riches!”, until they notice the word poor is involved. This is a common enigma in scripture…oftentimes it is a poor person who is the richest of all. It may be that on this earth the poorest Christian is “…as having nothing, and yet possessing all things.” (2 Corinthians 6:10b)

Can you call to mind the parable of the rich man in Luke 12, who stored up his goods and died the same night? The sober conclusion of the story is clear: “So is he that layeth up treasure to himself, and is not rich toward God.” (Luke 12:21)  Unless we want to meet a similar fate (though our death may be spiritual rather than physical – much worse), we must let go of our greed.

Practically speaking, how can I keep greed out of my future? Here comes that focus again…I’ve gotta check myself before I wreck myself. Is my goal stocking up gold, or the streets of gold? Walking down the straight and narrow, or the red carpet? If I’m more concerned about my pocketbook than my paradise, I’ve got one pricey problem.

Greed decides your future. This is the gravity of greed.

Remember the man who killed his golden goose? Because of his greed for more, more, more, he lost what good he already had. Such is the fate of all who are lovers of money; of those who do not regard the gravity of greed.

Greed denies your Father, destroys your family, and decides your future. While promising the world, greed will steal you blind. Let us be content with what God has given us, keeping money and material things of this life in their proper perspective. Our true treasure is elsewhere, after all…

Chelsea Bolks is a church of Christ minister’s wife, and the home educating mother of two children. She and her family currently reside in Northwest Iowa. 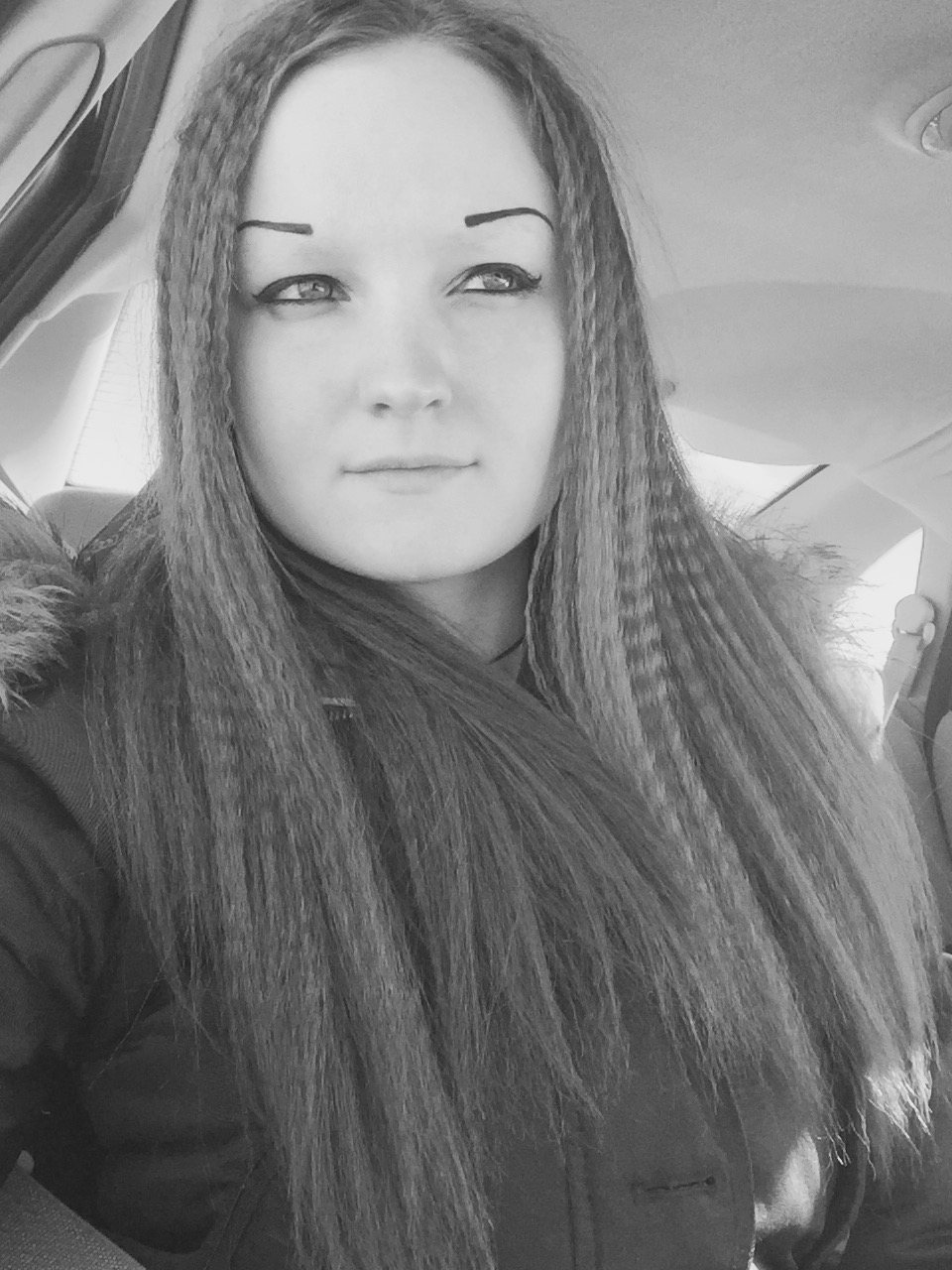 Let me help you find what you’re looking for!

Staying up to date on our blog is as easy as entering your email address!